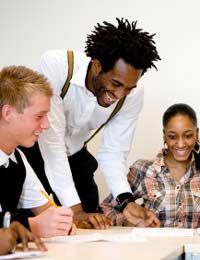 Conflict in and of itself is not really a good or a bad thing, the issue is how you deal with it. In fact, within the confines of a youth group, conflict can actually be constructive, rather than destructive, if dealt with in the right way.

That’s why kids who are taught to use strong interpersonal skills to identify conflict - and resolve it in a positive fashion early on - will no doubt go on to use these skills in later life. These skills involve identification of the problem, dialogue, cooperation and negotiation.

So try to look at conflict within your group – within reason, of course - as positive, not negative, and everyone can learn from it.

When a problem arises, it’s important to identify what really is happening, in order to find a good solution.

Once you have identified the conflict and its causes, it’s time to look at a solution. Solving conflict involves cooperation. And one method to get members of your youth group to learn how to cooperate better is to allow them to act out their feelings.

Get members to share a personal conflict or problem in their life by writing it out on scraps of paper, which is usually best done anonymously. Other kids will act out negative and positive ways of dealing with the conflict, prompting discussion. A good way to get everyone thinking…

Make a Game of It

Another way to prevent problems becoming bigger and spiralling out of control is to nip them in the bud before they start. Making a game out of conflict is a tried-and-tested way for young people to learn new skills, and develop safe ways of interaction that don’t involve fisticuffs, name-calling or disrespect.

One way to do this is through a game called, funnily enough, Conflict Resolution. It is like a formalised debate, but instead of gaining points by defeating your opponent you gain points by adding value to their ideas and thoughts.

By playing this game, members of your youth group will learn to build upon each other’s ideas, and work together to find a solution. Follow these easy steps:

Nipping It In the Bud

If the problem escalates or continues, you need to nip it in the bud before things spiral out of control. Don’t let a minor disagreement turn into a violent episode at worst, or simply one that ruins the atmosphere of the youth group for weeks to come. Conflict resolution, including dialogue, cooperation and negotiation, is important for the continued cohesiveness of the youth group.

It’s important to let your youth group members know that those who are violent or destructive may face suspension or permanent expulsion from the youth group. Such actions could include:

Hopefully suspension or expulsion will only be used as a last resort, as these are young people who could perhaps benefit from most from inclusion, not exclusion.

In the best-case scenario, resolving conflict in a youth group will involve negotiation, cooperation and dialogue, and help kids learn skills that will help them not only within the group, but also in various situations throughout their lives.

Agreement for Parents to Help at Youth Group

Why Play Games at all?
Share Your Story, Join the Discussion or Seek Advice..
Just read most of your article, really well put together, ive run rural and a youth club in my own town for years. I will suggest that some of the present leaders also committee members read this, i think that they will learn something from this to their advantage. I progressed from youth work to after time managing childrens homes, personally it made my career. Well done again.
Mini - 6-Oct-20 @ 10:44 PM
A very good and useful summarisation,which,incidently has allowed me to determine where my strengths and weaknesses are in real-time,thus bolstering my convictions to set up a youth club/group-only concentrating my efforts on both fundraising and premises aquisition as oppose to the hands-on which I will now leave to more like-minded individuals.
peter simpson - 24-Nov-11 @ 3:09 PM
Title:
(never shown)
Firstname:
(never shown)
Surname:
(never shown)
Email:
(never shown)
Nickname:
(shown)
Comment:
Validate: