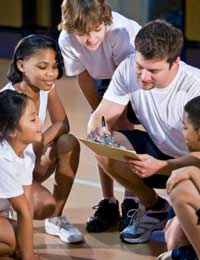 When the weather’s rainy, there’s no reason the children in your Youth Group should have to stay cooped up indoors with no way to expend their pent-up energy. Relay races not only allow children to engage in some healthy competition, they also encourage them to work on their team-building skills.

Playing games of skill and strength indoors on a rainy day can be fun – as can these silly relay games. Try a few on for size and see if they fit your Youth Group:

Get on your wellies and macs and have a run around outside, if only for half an hour. That breath of fresh air, no matter how brief, can make all the difference to children copped up in wet weather. See what you think of these relay races, which can be adapted to fit the age of your Youth Group:

While relays can be fun, they also have a tendency to get out of hand. If you don't want the children's natural exuberance and excitement to simmer into chaos, follow these simple tips:

Relay games can be fun when the weather is rainy or cold – and some relays can even be played outside when it’s bucketing down.

Just make sure you have enough towels handy when the members of your Youth Group come back soaking wet – and perhaps a change of clothes or two!

Our Youth Group's Got Talent