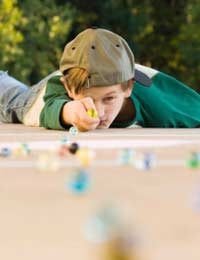 It is perhaps no longer the height of political correctness to play games which are designed specifically for one gender or the other, but the difference between girls and boys is so marked that occasionally it makes good sense to separate them up for a change. This article discusses some of the games a group of boys might want to play, and the practical benefits behind the games.

Youth leaders will recognise the truth that boys often tend to prefer more active games, while girls tend to prefer more cerebral and intellectual games. However, it is important to strike a balance and to expose each gender to experiences outside their comfort zone from time to time.

Played in the dark, in the woods, this is one of the most exciting, active and fun games; it also teaches boys about the necessity for teamwork and strategy, even in the most chaotic circumstances.

You need to measure a half-mile distance, where another leader should stand. The object of the game is to cover a mile in as close to 12 minutes as possible. Children should remove their watches as this is a test of their discipline and stamina. Send pairs of boys out at 2 minute intervals and keep a record of who arrives back, and how long it took. Consider buying some small prizes for the participants.

There are countless variations to the game, but one of the most popular is to assign different values to the throw based on whether it is caught on the full or after having bounced, e.g. "100 dead, 400 alive!" where 'dead' means the ball has bounced.

The roles are then swapped. The winner is the boy who acquires all the marbles.

This teaches the importance of acceleration and braking at the right time to maintain control of the car, and to get through corners efficiently.

Enjoy playing these games for boys with your youth group.

Why Play Gender Specific Games?
Share Your Story, Join the Discussion or Seek Advice..
Hello everyone; We need some help. We have a 4 year boy and a 6 year old girl. Because usually the man works these two are around too many females. I feel it is not fair for the boy. He needs to interact with other 4/5 year olds. He does act up and Iknow that he need to do boys stuff. He does go to preschool but it is summer and I think that he is not being stimulated doing things that boys like to do. Because I (I am the Nana) grew up with snow, sleet, rain and Ice I did ice scating and skiing. When fall comes I am going to try to have him ice scate. He did that for the 1st time last winter and totally loved it. My son and his wife would like to do something for this little one. My son works hard and long hours. Please will someone contact me and tell what sport (for fun, using up some of his energy and stimulation) would be good for this little one. Thank you Please write Linda
Linda - 5-Jul-12 @ 5:08 PM
Title:
(never shown)
Firstname:
(never shown)
Surname:
(never shown)
Email:
(never shown)
Nickname:
(shown)
Comment:
Validate: