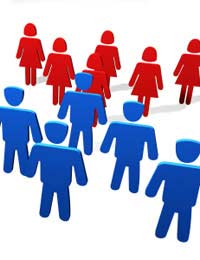 We live in enlightened times. We are encouraged to let people express themselves, and their individuality. So why do so many youth groups still play gender specific games? There are several reasons, but perhaps the most important is that children learn about themselves, and about what makes them different to other people. Gender specific games allow them to play with their peers without so much confusion over blossoming hormones, nor the need to justify their actions to people who regard what they are doing as 'weird' or 'strange'.

However politically incorrect it sounds these days, kids seem 'hard-wired' to gravitate towards gender specific toys from an early age. Some studies have shown that young boys will choose weapons, trucks and army guys to play with, while girls usually choose the dolls' houses and jewellery, even before they have been nurtured into these choices. However, it should be noted that some scientists believe that nurture plays a much bigger part than previously thought. The truth is probably somewhere in between, but the fact remains that a typical youth group will contain boys who by and large enjoy rough and tumble games, and girls who prefer quieter, more cerebral activities.

Youth group leaders would do well to make sure they are aware of these possible differences, and ensure that there are opportunities to play gender specific games as a consequence, particularly for older children. The important objective is to find the right balance between encouraging integration and stimulating already developed interests.

For older youth groups, one of the undoubted problems is maintaining a sense of healthy fun without allowing the teens to run riot. One way in which they are capable of doing that, once they hit a certain age, is by developing a marked romantic interest in the opposite sex. Gender specific games allow older children and teens to play games without that pressure to 'get with' another member of the group, although of course one shouldn't segregate the genders for too much of the time.

Following on from the last point, time to play gender specific games and to do activities together is important because it is likely to give children the chance to open up and talk honestly about themselves. Every adult remembers the embarrassment of youth, when personal questions made one clam up and stare blankly at the ground; everyone knows the horror of having to reveal a personal problem or secret in front of the girl or boy you fancy; and perhaps most obvious of all, everyone recalls the terror of the moment when your love interest saw you make a fool of yourself by tripping over and falling flat on your face during an active game.

Why not give the children in your youth group a chance to enjoy themselves occasionally without all those pressures?

Hopefully, if you haven't considered it before, this article will have persuaded you of the benefits of gender specific games and activities. Certainly as long as you strike the right balance, and provide plenty of other opportunities for group play, there is a definite place for gender specific games.