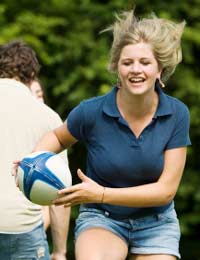 Older teens require a leader with nerves of steel and a sharp mind.

They're people on the cusp of adulthood, who think they know it all, and they are usually just dying to catch you out.

That means, as a leader, that you must be prepared, and have games and activities which grab their attention from the word go.

Thankfully, though, there are resources at hand: this article will provide you with some games which are guaranteed to get 16-18 year olds involved in a positive way.

Of course, all age groups love a wide game, but the unique thing about this age group is that they are usually much more trustworthy when it comes to 'rough and tumble' games. They also have the intellectual capacity to deal with the most complex forms of the wide game. This means that you can think up as many variations as you like.

One great version is Capture the Flag in which each team has two separate areas to defend - their base, and their 'jail', in which the opposing players remain captured. Players can be freed from the jail and then have a free walk back to their own bases, but the person who freed them is taking a huge risk by doing so!

The object of this particular wide game is of course to grab the flag which flies in the opposing team's base and bring it back safely to your team's base. There are many other variations on the wide game theme of course; be inventive, and come up with different ways to define objectives for each team.

Other active games can also be extremely popular with teens of 16-18. The key thing is to be imaginative and to think outside the conventional; kids of that age will usually be involved in local clubs if they are into specific sports such as football or cricket, so you need to find ways of building on the skills they have in those areas, and also introducing interesting twists.

One example of such a hybrid is 'Croccer', which is like Kwik Cricket but played with a baseball bat and a rugby ball. All the same rules apply - you can be out bowled or caught, and each team bats for a specific time before swapping over. The leader can also avoid accusations of bias by bowling for both sides.

The satisfying smack of baseball bat on rugby ball is hard to beat, and the peculiar bounce of the rugby ball evens up the fact that it is hard to hit long distances.

Another great game to play with this age group is Aussie Rules with a huge exercise ball in a wide open space; again, the thump of trainer on plastic is a hilarious sound, and the game often descends into anarchic scenes of amused teens piled up in a struggle to get to the oversized ball. These games allow teens who are often in the middle of stressful educational situations to let their hair down and relax.

16 to 18 year olds tend to be capable of more intellectual, strategic games than younger children. You can take advantage of their mental ability by setting them tough challenges for those rainy days when the group has to stay indoors. Some great games can be played with pen and paper, such as the Dictionary Game (which involves making up bogus definitions for outlandish words), Pictionary or Poetry Consequences.

Similarly, you can give the teens tougher games such as building carriers for eggs which can be dropped from a certain height, using only materials such as newspapers, pipe cleaners and glue; or even building a tower from newspaper and sticky tape. Whichever team builds the tallest tower wins.

The really important thing to remember is that these are people who are nearing adulthood. They are beginning to understand the responsibilities of maturity, and that realisation may scare them a little. As a youth leader, your job is to tread the fine line between patronising them, and giving them a chance to express the last vestiges of their childhood before striking out on the road towards sophistication. These games should help you toe the line, and you may even have a little fun into the bargain!