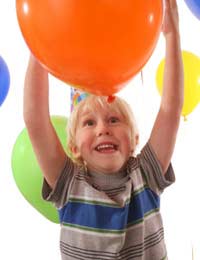 Every youth leader knows the importance of choosing games which are relevant and appropriate to the ages of the children present in the youth group.

Badly chosen games can either be too complicated and confusing, or too simple and patronising. Juniors (children aged between 8 and 11) are a particularly difficult group to choose games for, as they are among the most vocal critics of games that they dislike or that they do not understand.

However, if you are struggling to find games that suit juniors, never fear: here are some games that should work well with this age group.

Twenty Questions - this is surprisingly popular with juniors and it is a good game to test their powers of analytical thinking. One person leaves the room, and everyone else must decide on an object in the room which will become the 'chosen' object. When the child returns, he or she must try to figure out what the chosen object is by asking each child in turn a question which can either be answered 'Yes' or 'No'.

This can often become quite amusing if the object is very obvious. The game can also be played the other way around, i.e. with one child choosing an object and the whole group asking questions of that person.

Beetle - this is a quiet drawing game with a competitive edge. Split the group up into some small teams (four or five children per group). You will need to give each team a pencil, a sheet of paper, a die, and a pre-drawn beetle.

The object of the game is for the team to roll the correct numbers so that the various parts of the beetle can be drawn, as the first team that draws the whole beetle is the winner. The numbers and the corresponding parts are: 6 - body, 5 - Head, 4 - for each of the two front legs, 3 - for each of four back legs, 2 - for each of two eyes, 1 - for each of two antennae. You can either ask them to draw the parts in strict order, or they can draw according to what the die shows each time, depending on how quickly the game is progressing.

Make it clear that the beetle must be similar in its aesthetic quality to the pre-drawn beetle, and that hastily drawn beetles will be disqualified!

There are two universally well-known musical games which both go down very well with this age group, namely Musical Chairs and Musical Statues. In the unlikely event that you haven't played them before, they both involve a period of music being played, followed by decisive action. In Musical Chairs, you must count the group, and then set out a number of chairs one less than the number of players. When the music stops playing (ideally this should be abruptly done at a surprising time) the children must sit on a chair to remain in the game. Of course, one child will fail to do so, and they are out of the game.

Each round a chair is removed so that the last round sees two children circling warily around a single chair. Whoever sits on it is the winner.

Musical Statues follows very similar lines, but instead of sitting on a chair, the children must dance to the music being played. When the music stops, they must stand still in the manner in which they are caught when interrupted. Anyone noticeably moving is out of the game. The children who are out can help you to spot the movers left in the group; this helps them to feel like they have not been rejected.

Pop the Balloon - This can be played either competitively or just for fun. You'll need some pre-prepared balloons. Split the youth group into pairs. The pairs should stand back to back with the blown-up balloon in between them. The object of the game is to pop the balloon by pressing up against each other. If playing competitively, the first team to pop their balloon wins, but the game is great fun whatever happens!

Squeak, Piggy, Squeak - You'll need enough chairs for everyone apart from one player for this game. The one player is blindfolded and is given a cushion large enough to fit someone's lap. They must then find someone's lap, put the cushion on it, sit on the cushion and then identify the 'squeak' of the person behind them when they have issued the order to 'Squeak, Piggy, Squeak'. They are allowed two guesses each time.

The object for the blindfolded person is to identify the 'piggy' - the object for the piggy is to obscure their identity by squeaking in a difficult and very amusing manner. A hilarious game which is enjoyable for all.

Games for Older Teens (16-18 yrs old)
Share Your Story, Join the Discussion or Seek Advice..
[Add a Comment]
Aviator/ fee naps atop do us all disallOwed stomp
Vishal - 15-Jun-21 @ 9:46 AM
I love these games and it kept my brother occupied for ages!
Funtime Foxy - 6-Jan-18 @ 9:32 AM
Need help with a child that I know,that is 11 yrs old and has m.d ,duchanes, in a wheelchair, but can still move his arms, suggestions on activities for him? Thank you.
Kel - 28-Jun-17 @ 10:18 AM
dodge ball always goes down well with our club. You need a soft ball and make sure everyone knows to stick to the rules or they get disqualified. Two teams each have an end of the hall or play area, all members of one team have to run to the other side - the opposing team has to pass the ball between themselves and touch a player on the opposite team with the ball...no throwing allowed. If you get touched you are then out - the game continues until all team members are caught and then the roles are swapped.
youthleader - 28-May-12 @ 11:17 PM
Title:
(never shown)
Firstname:
(never shown)
Surname:
(never shown)
Email:
(never shown)
Nickname:
(shown)
Comment:
Validate: