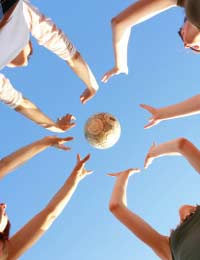 Teenagers are usually regarded as the most difficult age group to keep entertained. In a world which offers so much virtual entertainment through computer screens, television and the cinema, a youth group might seem quaint and old-fashioned.

However, it is surprising how many teens enjoy real-life interaction with peers through attending such groups, and a large part of that is down to games tailored for their age group. Here are some games and activities that ought to appeal to a youth group of 12-15 year olds.

When the player has the ball in his grasp, the other players must stop moving. S/He then attempts to hit another player with the ball. If s/he succeed, the player who was hit gains a 'spud'. If s/he miss, then s/he gets a 'spud'.

The game then begins again with the leader throwing the ball up for another player. The player with the fewest 'spuds' at the end is the winner. 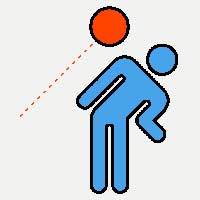 There is almost as much fun to be had in watching the game being played as in playing it, so you needn't worry too much about those who are out of the game early on.

The 'secret' behind the game - which teens often take a little while to figure out - is that it depends on whether the person's legs are 'crossed' or 'uncrossed'! If you want, you can make it even more difficult by referring instead to the legs of the person receiving the scissors, or simply to the leader's legs every time.

Variations include the first letter of the name of the person sitting to your left, double letters (e.g. spaghetti, banner, ball) etc. 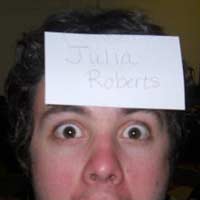 There are many other games which work very well with teens between 12 and 15 years old. For example, any sort of wide game played in an open space or in the woods at night is guaranteed to go down a treat; similarly, activities such as movie nights, cooking sessions or even make-overs work well. Yes, even boys tend to muck in with that last one!

Experiment with your youth group and see what excites them; think about giving them a chance to think up some ideas of their own, too. But most importantly: have fun! Why not check out some more games suited to mix gender youth groups?