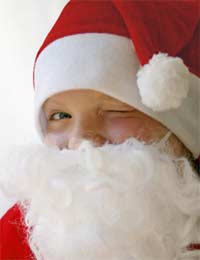 You might be forgiven for thinking that winter is the most difficult season for youth groups due to the inclement weather and the lack of daylight.

Cooped up indoors, away from the bitter cold, it is hard to generate the sort of energy that usually characterises youth group games and activities.

However, help is at hand. One of the best ways to put the pep back in the youth group's step is to play seasonal games with them, and in winter, that means Christmas games!

One of the best ways to get into the Christmas spirit is by playing dressing up games. One very popular Christmas game, therefore, is the Santa Dash. You'll need to provide Santa outfits (one per team), chocolate bars (one per team) on a plate with a knife and fork, and several dice (one for each team).

The object of the game is to be the first team to eat the entire chocolate bar, but for this to happen, a chain of events must occur and recur several times. Namely, each person in a team attempts to roll a six. When a six appears, the player must hurry to the Santa outfit and put it on as fast as possible, then run over to the chocolate and eat it with the knife and fork (easier said than done!). However, by the time they've done this, another team member may have rolled a six, which means they have to swap. As you can see, it is often a hilarious game, with Santas frantically rushing around and chocolate-stained beards aplenty.

Another great dressing up game for Christmas time is the Suitcase Relay. This again requires some preparation: you'll need to bring a suitcase for each team, full of oversized winter clothes. Each team lines up in a row, and on the leader's whistle/word, the first player must open the suitcase and put on the clothes. They must then run to the end of the hall and back and re-pack the clothes in the suitcase for the next player. The winning team is the first to have all its players complete the course and successfully re-pack the suitcase.

Teams should decorate their team mates, as well as they can, in the Christmas spirit. Leaders can then judge the decorations and award points or prizes. If you want to make it extra hard, have each team make up a song or jingle about their tree, too.

The game is very simple: each team must sing a carol. If necessary you can provide lyric sheets. However, here's the twist: each word must be sung by a different player. The easiest way to organise this, of course, is to stand in a circle, or a line, but many teams do not work this out until quite late on in the piece! Leaders can give points and prizes depending on which team sings their carol best.

Teams should mark off carols as the game goes on. The team with the most points at the end wins, though you should make sure the other teams receive some Christmas prizes too!

Even though winter can be somewhat depressing, hopefully a good number of Christmas games and winter activities will stave off the feelings of cold and isolation that can beset everyone around this time. The important thing is to keep the energy levels up as much as possible by playing games that keep the children's spirits up. The games found here will certainly help you in this difficult task!