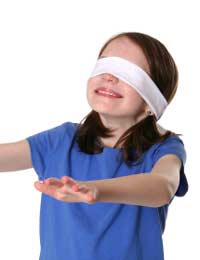 One of the best ways to develop friendships with people is to play games. This is widely recognised as a truth, hence why so many companies pack their employees off to do team-building activities or paint-balling once a year. However, the difference between youth groups and businesses is that children are almost always much more willing to let people into their world, and much less willing to prejudge people.

This means that when youth groups play friendship-building games, they are much more likely to have a pronounced effect on group dynamics, and ultimately that they will indeed increase the number of positive relationships in the group. Here, then, are some good games and activities with which youth groups can build friendships.

Everyone has probably gone through the trust game where one has to fall backwards into the arms of one's peers. The idea of this is to instil a sense of trust by showing that the people around you will take care of you and lift you up when you need to be supported. Although the premise of the game is good, and the reactions of participants tend to be quite strong, this particular game has become slightly clichéd. Thankfully, though, there are other trust-based games which are effective in encouraging friendship.

One such game is the Control Tower game which sees one member of the group blindfolded and their partner guiding them through an obstacle course. When they have successfully reached the end of the course, roles are swapped and the course changed. This is very good for establishing communication and friendship, as well as creating a fun and competitive atmosphere.

Another more difficult trust-based game is the Body Lift. This involves teams of eight to ten people, and should only be played with a mature and trustworthy group. Each group chooses one person at a time and lifts him or her up over the heads of the group. The person should be held there for however long you deem appropriate, and then lowered back to the ground very carefully. The person in question should relax and close his or her eyes.

It is helpful for the leader to command each group to do everything at the same time, as otherwise communication can break down, and this can lead to dangerous situations. After each person is lowered to the ground, it can be interesting to ask them questions about their experience and how their opinions of their peers may have changed, though this should only be done if you are an excellent judge of the atmosphere and the honesty of your youth group's members. 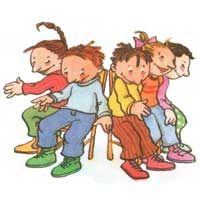 These tend to work best with younger children, but they can occasionally also be used with older kids and teenagers. One great silly friendship building game is a version of Musical Chairs with a difference. Instead of removing a player and a chair from the game each time the music stops, only remove a chair! This eventually means that the group will end up having to squeeze onto one chair, of course. Make sure the chairs you are using are sturdy, and also try to ensure that the group is not too big as even the strongest chair will struggle under the weight of 15 overgrown teenagers! This will definitely break any lingering ice between members of the youth group as it is in their interests to help each other not to get crushed.

Another silly game to play with a new group is Silent Interviews. This is very much like a game of Charades, except it involves imparting rather more information, so it can be quite hilarious to see the frantic acting of the children. Split the group up into pairs and have each pair tell each other three things about themselves - but without speaking. When they have had enough time to give it a good go, bring everyone back into the group and have each person introduce their partner, and the things they learned - or at least the things they think they learned! This game reveals interesting facts about each person and helps to build bonds between peers in a very fun, relaxed way.

Games that require children to get up close and personal are fantastic ways to build friendships, or to build upon relationships that already exist. It's hard to remain a distant acquaintance with someone when you've had your elbow in their neck, or your knee embedded in their armpit! Physical games help break down boundaries, both metaphysical and otherwise, and the bonus is they're also great fun.

The Human Knot is one such example of a game that requires everyone to get relaxed and silly. Six to 12 group members stand in a circle, then have to hold on to another member's hand - but not someone standing either directly to their right or left. This game requires a lot of cooperation and is a great team-building exercise. Best of all, the hilarity that ensues is unimaginable!The Obstacle Course is another fun game that challenges children both mentally and physically. Get a group of three children to make a makeshift obstacle course, using a piece of chalk drawn on cement. For example, they may draw a box that someone has to jump in five times, then a circle they have to stand in and turn around ten times. They then have to walk backwards on a thin line, stopping in a drawn square where they have to shout "Duck!" Kids will have great fun both designing the course and completing it.

Learning Can Be Fun

Never forget that a good game is a great way of building friendships between people. But also make sure that the way you lead the games is both fair and firm; the most likely way for a friendship game to go wrong is if people feel that they have been dealt with unjustly, so concentrate all your efforts on being a just referee, and you won't go far wrong.

Here are some simple tips to make sure your games are as successful as possible:

Now check out some team building games!Here's to many happy friendships as a result of your leadership.

Team Building Games
Share Your Story, Join the Discussion or Seek Advice..
Hey nnnnn the ads usually reflect the browsing history of the person's computer you are using... sooooo.... maybe start there.
MC - 5-Sep-18 @ 11:42 PM
Why have you got a 'mature dating uk' advert up on a site for youths. Was looking up games for friendship building as I am a youth worker and saw a picture of a woman with most of her breasts displayed advertising a dating site.............and wonder why? Are you able to remove it because it is really creepy on a site about young people. Thanks
nnnnn - 4-Sep-12 @ 2:31 PM
i think that there isn't enough games, what if you planning a friendly games night??? I need a team building game for 5 or 6, any help??
HH - 24-Jan-12 @ 6:41 PM
Title:
(never shown)
Firstname:
(never shown)
Surname:
(never shown)
Email:
(never shown)
Nickname:
(shown)
Comment:
Validate: