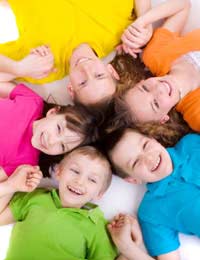 One of the hardest parts of growing up is moving from a social group which is exclusively made up of one's own gender, to a mixed group involving both sexes. For teenagers in particular, this is a time associated with humiliation, disappointment and heartbreak, even if later in life you look back and realise that all those times you felt like you'd been stabbed in the back were merely scratches you brushed off easily. Youth group leaders will quickly realise that one of the best ways to deal with the awkwardness of mixed-gender groups is to play a lot of games. But why do games work so well in helping the genders to mix? This article explores some of the reasons.

Perhaps the most important reason why we play games to help the genders mix is because they create an atmosphere of fun. It is a well-known fact that the most likely way for children to feel comfortable is in an environment where they are allowed to express themselves fully, without formality or strict rules. Games, whether active or quiet, calming or boisterous, provide that environment whereby children can learn to just 'be' around each other, without any need to reveal too much personal information and without any need to speak to a person of the opposite sex directly. Instead, their memories will be dominated by thoughts of how fun it was to play the games, and in time, the fact that the group was mixed-gender will cease to be an issue.

Another important element of playing games to encourage the genders to mix is teamwork. For many games, teamwork is an essential skill in order to win, and most children of both genders are extremely competitive. This competitive spirit usually trumps any awkwardness they might feel at being in a mixed-gender team, and depending on the game, teamwork should help the children to bond and to feel like they are a useful and a welcomed part of the peer group. It also helps children to learn to respect the different skills of others, and to appreciate that they may not be able to do everything for themselves - an important lesson for later life.

The other interesting and useful thing about playing games to help the genders mix is that through playing games, the children will have a chance to learn about the differences between the sexes. Even though children's cognitive skills are not fully developed, the tendency for boys and girls to have stronger capacities and abilities than each other in certain areas will become apparent when games are played. For example, the hand-eye coordination or the strength of boys may be superior when a ball game is played, but the artistic ability of girls may shine through when playing Pictionary or some other creative game.

One should note, of course, that youth groups will vary in their skill sets and sometimes these examples will be way off the mark! However, the point still stands that by playing these games, the respective genders will begin to see the differences between them, and that is likely to have a marked and positive effect on future relationships.

Playing games to help the genders mix is therefore a very worthwhile endeavour for youth group leaders to consider. One should ensure that the teams are well mixed, as pitting boys' teams against girls' teams tends to drive a wedge between the genders, rather than bringing them together. If you have a particularly mature youth group it can work, but on the whole you should try to mix the teams up as much as possible.

Best of luck, and here's to a successful, balanced, mature youth group!