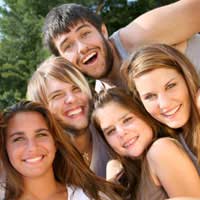 We all remember how it felt to be a teenager, standing nervously on your own in the middle of the school disco or a friend's living room, hearing conversation all around you and feeling that familiar sense of dread. For some youth leaders, this is how it feels to be leading a youth group! Perhaps that's a little bit dramatic, but there can be no doubt that for many youth group leaders, the question of gender plays a massive part in the worries and stresses that arise. This article discusses some of the approaches one can adopt in answer to the difficulties of mixed gender groups.

One key attribute of a successful leader of mixed gender groups is the ability to be patient. In nine out of ten awkward mixed gender situations, a willingness to listen will go a long way to alleviating the problem. If the kids in your group know that you are happy to hear them open up and reveal their problems, whatever they might be, then they will increasingly take you into their trust; eventually, the security that your friendship brings will mean that they do not need to test it any more.

Patience is also a definite virtue when tempers flare for whatever reason: that priceless ability to keep one's head when everyone else is losing theirs will stand you in good stead as you deal with the issues that a mixed gender group will throw up.

Another essential tool when dealing with mixed gender groups is humour. If you didn't think you were a comedian before becoming a youth group leader, you'll certainly become one soon enough - whether you know it or not! As a youth group leader you have to be prepared to take the rough with the smooth, meaning that sometimes the joke will be on you. But more importantly, knowing when to slip in a dry comment or defuse the situation with a joke can really help.

Often, humour can serve as a way of turning something around and making a person think again, and that is a key approach when tempers and hormones are raging; the ability to make people realise they are going too far, without angering them further, is priceless.

This is something that comes with practice, but it is probably the most important of all the skills a youth group leader needs when coping with mixed gender groups. Sometimes you have to acknowledge that no amount of humour or patience will suffice to deal with the situation, and instead you have to make a hard decision. Occasionally that will mean making someone sit out from a game, or banning them from a certain treat; other times it will mean deliberately segregating the gender groups and giving them a chance to cool down by doing something different.

Only you will know what the right decision is, based on your own knowledge of your particular youth group's needs; hopefully this will have helped you to become a more precise evaluator of circumstances, and of the possible remedies to the problems you are facing. Running a mixed gender youth group is a mixture of bravery, skill, humour and luck, but most of all perseverance, so keep at it!