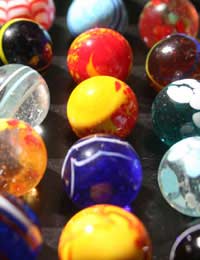 Every child has their own special skills and talents, and making the most of them can benefit both them and society. You can't lose if you plan youth group games and activities built up around the children's strengths – and they'll benefit as well!

Being athletic is considered a must in today's society, but not everyone is up to the task. Children with poor athletic skills often suffer rejection by their peers, so helping them find a sport they enjoy – and one that will make them more capable - can be a youth group lifesaver.

These are the most obvious games to improve athletic skills, from football to cricket to archery, as well as traditional playground games such as dodgeball. When weather permits these are great, but include some non-competitive games as well. Marbles, anyone?

A game of rounders gets everyone involved and helps to improve bowling, batting and catching skills as well as giving kids a run around. Use a softer ball if kids aren't used to the hard variety and either a rounders or cricket bat will do. This is a game that can be played indoors in the church or community centre hall for example, but with tennis table bat and ball instead to avoid breakages.

Another great indoor sport, requiring thick markers, three dustbins and seven tennis balls. Arrange bins in a row facing the players. Decide where a throwing line is, move the bins seven feet away and mark it. Kids take turns getting the balls in the bins and score points. As they improve, so do their confidence levels.

Playing games which encourage children's artistic expression is important, especially for kids who like crafty activities more than anything else. Here are just a few to get their artistic juices flowing...

Brainy kids will love these games – and hopefully so will everyone else...

Learning to be an active and productive part of society is something all children need to learn and games which reinforce cooperation, sharing, tolerance, empathy, listening and friendship are invaluable. Here are just a few games to set your youth group members off to a good start:

You can't go wrong when planning youth group games and activities that play up a child's specific skills set. These games are not only fun but educational, and will reinforce those who already have accomplished certain skills, as well as help those who are still working on them.