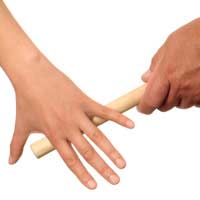 One of the most simple relays is, of course, the Shuttle Relay. This simply tests the speed of each team, so make sure you choose fairly balanced groups. Each team lines up and, one at a time, races towards a turning point, at which point they turn round and return to their team to tag the next runner. Whichever team completes the race first is the winner.

This is very easy to set up, and there are some easy variations you can throw in to change the relays - skipping, walking, hopping, etc. Alternatively, if you have enough leaders, have one leader stand at each end of the hall, and simply have each runner run to the other end of the hall. When the runner passes the leader, the leader waves a flag or an arm so that the next runner can begin. This gives a slightly more tense feel to the race.

There are some great complex relays and races that you can play with your youth groups. Here is a list of a few of these relays and races, which take slightly more preparation:

However, the spinning causes a certain amount of dizziness, and there is a strong likelihood that some of the youth will fall over - especially as the lure of competition makes them spin a little faster than they should!

There are many other relays and races that youth groups can play. However, we hope that those mentioned here will be a good starting point for leaders who are seeking to play games that are fun and competitive. Enjoy these relays and races!