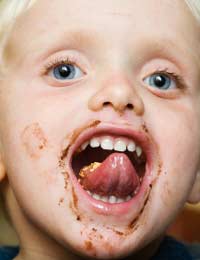 Messy, food-related games are an undoubted favourite with people of all ages – and not just kids! They’re certainly favourites with experienced youth group leaders, who know that whenever they tell the group they’re going to play a messy game, the reaction is guaranteed to be positive. Of course, the drawback with messy games is – obviously – the mess, but some games can be messy without leaving you having to clear up afterwards. This article explores just a few of the examples available.

This is a very well-known messy food game, though it’s very easy to set up and tidy up. It is also easy to adapt for special occasions and holidays, such as Christmas or summer time. You will need to acquire some materials for the game:

The game essentially works as follows, assuming you are playing as one group. Everyone sits in a circle and takes turns to roll a die. If the die shows six, the player who rolled it should race to the pile of clothing and put everything on as quickly as possible. Once they’ve done this, they should run to the bar of chocolate and start eating it – but with a knife and fork! While all this is going on, the other players should continue trying to roll a six themselves, so that they can take over from the person currently scoffing the choc.

The game finishes when the entire chocolate bar is eaten. If you are playing the team version of the game, you’ll have to buy chocolate bars for each team – and the team that eats their bar first wins the game.

This is a funny, enjoyable game which is likely to allow most, if not all, of the kids a chance to eat some of the chocolate, even if they don’t win the game. If, however, it’s proving a little difficult for some of the kids to get to the chocolate before the next six is thrown, you can subtract steps from the process to make it easier.

This is a much calmer game, but it still has the potential to get rather messy if desired. It’s very much one of the games where kids can learn about each other through play. Very simply, the group should sit in a circle around a toaster. The leader should provide this, along with plenty of bread. A piece of bread should be put in the toaster and cooked. While the toast is cooking, each player has to state an interesting fact about themselves in turn.

Whoever is speaking when the toaster pops up has to eat the toast with whatever topping the leader chooses. This can start off very simple – jam, peanut butter, etc – but can progress to more messy and unusual ones, like mashed potato or ice cream! This game teaches children information about their peers, but it’s also the combination of competition and messy food-related fun that they most enjoy.

Here is a list of other more messy games that you could consider playing with your youth group: