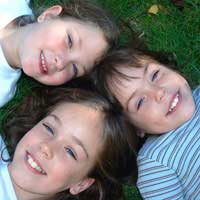 Calming games are one of the most important tools a youth leader possesses. It is essential that you have games up your sleeve for the kids to play when they've burned off their energy and have been acting a little bit 'hyper'. Children may often complain at the end of active play, but if the calm game you choose is the right one, they'll soon settle into play and they might even end up enjoying it!

Calming games are underrated because they can actually have all the same qualities as an active game, apart from the need to run around like headless chickens. Children and teens can learn many of the skills that they would get from active play, and because these calming games involve less physical effort, their minds may actually absorb more of what they hear, see or do. With that in mind, here are some great calming games to play with youth groups.

This is, of course, the quintessential calming game. Great to play for children of all ages, it requires absolutely no preparation and no effort on the part of the leader - a perfect game, in other words!

Most people will have played this at least once, but just in case you haven't, here's how it works: all the children lie down on the floor and pretend to be asleep, keeping themselves as still and as silent as possible. The object of the game is to be the last one to move or to 'wake up'. The leaders should make the job more difficult by creeping between the 'sleeping lions' and making funny comments, or suggesting that children have moved when they have in fact remained still.

It is remarkable how many children will abandon the game and suspend play to complain at a perceived injustice - at which point you can notify them that as they have awoken from their slumber they are out! This is good as a closer to the evening, but don't play it too often, otherwise children tend to get a little bored of it.

This is, if anything, even simpler than Sleeping Lions. It is also a very short game, but it is surprisingly calming and leaves the group in utter silence. To play the game, the youth group must stand in a circle. The leader will stand in the middle and hold a stopwatch. The object of the game is to sit down precisely a minute after the leader has started the stopwatch. Many groups who play this find that it is an interesting insight into the power of peer pressure, as many children just sit whenever someone else does.

However, it is also surprising how close many children get to estimating a minute correctly. You will need to ask another leader to monitor who sits down, and when, especially if you have a particularly large group. It is easy to play this game any number of times; often kids will ask to play another round if they feel that they can improve their performance!

There are many other calming games which are great to play, and which can really help with that transition between active play and the end of the evening. Here's a brief list of other calming games for you to play:Hopefully you will find these suggestions useful for your youth group. It can be difficult to calm excitable kids down, but these games will help the children in your youth group to play and to learn without smashing anything, tripping each other up or even making a racket. Now who wouldn't want to play games like these?!