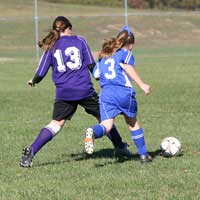 One of the most worrying trends in Western society at the moment is the rising rate of obesity among the youth of the nations. Pampered, lazy children are being fed on diets that are incompatible with fitness and energy, and at the same time, doing less exercise than ever before. This can only lead to one result: a nation of couch potatoes. Thankfully youth groups can provide at least one avenue out of the problem by encouraging active play. This article will explore some of the reasons why active games are so important.

Easily the most important reason why youth groups should play active games is because it gives the children plenty of exercise. Although it’s not enough on its own to constitute a weekly fitness regime, it’s a good start, and by playing active games, children may start to do so in their own time as well as when they are being supervised by adults. There is just no substitute for a good run around to blow away the cobwebs which may have built up through years of over-eating and television-watching or computer gaming.

Another important benefit that children may gain when they play active games is a sense of awareness about their surroundings. When we play active games we learn to use our senses in a different way from how we would at home or at school. For example, if we were playing a wide game, we would need to be aware of threats from all sides, so we would probably use our peripheral vision more than usual. Similarly, if playing outside, in woods or an open field, a child might well learn to watch out for hidden obstacles or dangers around them. So awareness is another great reason to play active games.

This is something that all youth groups want to see from their members, and to play active games well, you need to learn to work as a team. Wide games in particular require good teamwork, but standard sports like football or Unihoc also encourage children to play as a team. Active games require strategy and a degree of selflessness. For example, in a typical wide game, you will need to decide who is going to attack and who is going to defend; attackers may decide to attack together or to create diversions or distractions for other team members, while defenders decide who will defend which part of the base. Kids typically enjoy this type of organization, and it teaches skills which can be used in many more situations than they will be aware of at their age.

An underrated reason to play active games is that it is almost guaranteed to create an atmosphere of fun and hilarity. Children love playing active games which require lots of energy and run at a quick pace, and their sense of fun will create enjoyment for themselves, their peers and for the leaders involved. Just make sure you can keep a lid on all the excitement, otherwise you might have a job on your hands maintaining discipline. Thankfully, whistles seem to have been invented precisely for this reason, as they command instant attention. Active games can also help to instill the right response to authority in children, then, as well as allowing them to express their energy and sense of fun.

You will also need to ensure that your youth group’s insurance policy covers the game you will play and the area you are playing in, as the likelihood of injury increases with certain sports and environments. However, as you can see, there are plenty of reasons to play active games with your youth group. Just be prepared for the children’s enthusiasm, make sure you know the rules, and everything else should take care of itself!